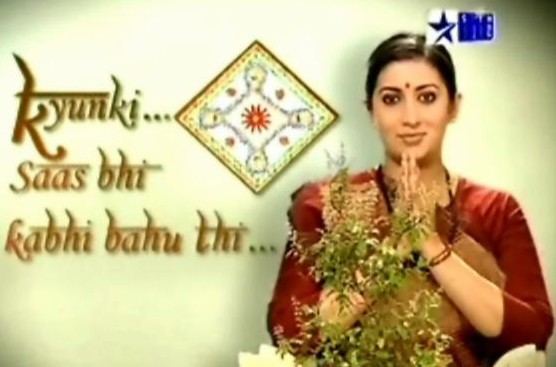 The Indian Soap Opera scene has been hijacked by the star plus brigade and Ekta Kapoor Productions and has been a constant source of brainwashing of a million of its viewers. It very subtly tried to pull back the Indian Society by a couple of decades…with almost all of them agreeing on the fact that Indian women can never do any job except for plotting complicated schemes directed at either one of the “Good bride” or the “Good sasuma”. Women are projected with as villainous characters (Komolika, Kasauti Zindagi Ki) that are spiteful because they are spiteful. While the film industry has been churning out progressive cinema which challenge social norms and highlight social problems(Peepli Live, PK), the television Industry is still concerned as to whether or not Gopi Bahu cooked the Rice propery (Saathiya Saath Nibhana). The Indian television Industry has been stagnant since the inception of Kyunki Saas Bhi Kabhi Bahu Thi, it has retained similar story setups and attracted a similar audience base (Housewives with nothing better to do) while the Indian film Industry has expanded its horizon in all fronts. This post shall give you the 7 reasons as to why the Indian Soap Industry must be scrapped off.

Exceptions being set aside, almost all of the Indian Soap Operas revolve around the ancient “Joint Hindu Family System”, a social institution which has weakened over the decades to the much more easy to handle “Nuclear Family System”, but our Soap Operas are like little time capsules that make us go back to the “Good old days”, where family values were cherished. These “cherished” family values include the fact that almost in no family is any women ever shown to be under any sort of an employment. The most serious responsibility that a “nayi bahu” can have is having the command of the Kitchen…that is like serving as a brigadier in the military. These Parochial setups glorify Patriarchy, Arranged Marriages, Autocratic control of the elders over the youngsters, and basically everything that a liberal might be against. Thus, they brainwash their audience base (Housewives with nothing better to do) and then these Housewives try to emulate their newly found role models in real life…and this continues to perpetuate all that is wrong with our continuously conservative society.

Even though most of Rohit Shetty’s films also lack “basic logic”, at least we have to watch his logical failures twice or thrice a year…but these soap operas fail to make sense every single day in a manner that is scarily consistent. From rebirths, to women who serve as IAS officers without letting their family know about it, to living past 150 years (Baa from Kyunki Saas hai bahu thi), and the fact that everyone dresses like they need to go to a wedding any time soon, the level of logic permeating through these artistic creations would put Chetan Bhagat to shame.

The Indian Television Industry might be the reason why most Bahu and Saas relations are strained. Their conception that a Saas and Bahu relationship is almost always plagued with this competitive urge to prove to the Son that he should favour one and not the other. These self created stereotypes might actually make the fickle audience of these shows do these very things. Furthermore, they create idealized images of The Perfect Bahu and The Perfect Son. Now what these idealized images do is that they provide a benchmark for the housewife viewership to compare with their very own Bahu’s and Son’s. The Perfect Bahu is characterised to be a person who takes care of her family, stays at home, does all the chores and does not bother her mother in law for anything, obeys almost everything that she’s told to do, and must sacrifice all her dreams and aspirations for the sake of the family. The desire to have a “Perfect Bahu” makes the oh-so-intelligent viewers alter the behaviour of their Daughter-in-laws who may be modern educated women who want to assert their independence by taking on jobs…these serials project the ideology of “Mere paas toh paise hai toh tereko kamane ki kya zaroorat” and their avid viewers go implementing the same.

A typical Indian Show is telecasted 4 days a week, throughout the year. So the writers obviously have no time to think of a plot while the USA counterparts follow the seasonal approach, with even only one show being telecasted per week, thus the writers are actually able to think before they dish out something. An Indian Show is continued for the sake of employment of all the members concerned and there exists nothing artistic about it. The plot starts from nowhere and it leads to nowhere. Whereas there are definite goals and objectives set in mind in a US television series. The Indian television series on the other hand does nothing more than act as a National Rural Employment Guarantee Act for all the actors concerned, who otherwise might have been sleeping on park benches, trying to somehow break into the already overcrowded world of bollywood.