Cricket,also known as the “Gentlemen’s Game”,is one of the most popular games in the  world.Earlier cricket used to have only two formats i.e. One Day International(ODI) and Test matches.But,in 2003  the England and Wales Cricket Board(ECB) introduced a new format of the game i.e. the t20 format.This format gave a new definition to the game.This is the shortest format of the game and the most thrilling one also.There are a lot of t20 matches which can never be forgotten by the fans and the players.Here is the list of 4 most memorable international matches in t20 cricket:-

One of the most exciting match was played between India and England in the first edition of t20 world cup.This match is usually remembered for Yuvraj Singh’s six sixes in an over.India won the toss and elected to bat first.Indian openers Gambhir and Sehwag gave a good start by scoring a fifty each.But,after their wickets,England took Uthappa’s wicket for just 6 runs.Yuvraj Singh and the Indian skipper MS Dhoni were on the crease.Yuvraj had an argument with Andrew Flintoff which was sorted by the umpires and Dhoni.In the very next over,Yuvraj Singh was on strike and Stuart Broad was about to bowl.Yuvraj Singh was provoked due to the argument with Flintoff.He went on hitting six sixes in that over!Because of this Yuvraj even made his fifty off just 12 balls which is still the quickest half century in any format.Due to such a good batting of Yuvraj Singh,India were able to give a target of 219.England tried to fight back,but in return they were able to make only 200 runs and India won this memorable match. 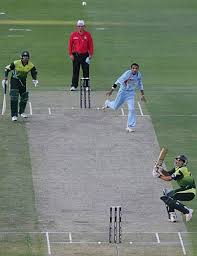 It was the final of the first t20 world cup which was hosted by South Africa.The final match was between arch rivals India and Pakistan and was played at Johannesburg.Mahendra Singh Dhoni,the Indian skipper,won the toss and elected to bat.Indian opener Gautam Gambhir played a tremendous innings by hitting 75 runs off 54 balls.Though Gambhir looked in good touch,his teammates were unable to perform up to the expected mark except Rohit Sharma who scored 30 off 22 balls.Umar Gull bowled brilliantly and was successful in taking  3 wickets.India’s final score was 157 runs for the loss of 5 wickets. Pakistani opener Imran Nazir posted 33 runs off just 14 deliveries.As the target was  not a big one,the match went slightly in the favour of Pakistan.But,the Indian bowlers had some other plans for them.Both RP Singh and Irfan Pathan took 3 wickets each.The Pakistani batting line up was unable to perform against the Indian bowlers,except Misbah who was playing pretty well that day.It was the last over and Pakistan needed 13 runs but they had only one wicket in their hand and Misbah was on the strike.Everyone was sure that Dhoni will give the last over to the experienced Harbhajan Singh.But,Dhoni gave the last over to Joginder Sharma.Joginder started his over with a wide.The  next ball was a dot ball.Now Pakistan needed 12 off 5 balls.Misbah sent the next ball for a six.Pressure was building upon India and everyone started thinking whether  the decision made by Dhoni was correct or not.The very next ball bowled by Joginder was played for a scoop by Misbah,but Sreesanth was there and took an easy catch and India won the inaugural t20 world cup in a thrilling manner. 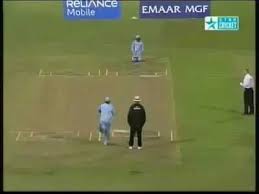 Before the amazing final of t20 world cup 2007,India and Pakistan faced each other in the group stage match.Pakistan won the toss and elected to field first.Indian batting order was in shambles against the Pakistani bowling except Robin Uthappa who scored a brilliant fifty along with skipper MS Dhoni.India kept loosing wickets on regular intervals due to which they were restricted to 141  and Pakistan’s Asif took 4 wickets.Pakistan also lost wickets at regular intervals.But due to Misbah’s fifty they were able to draw the match.Now,a bowl-out came into action to decide the winner.In the first round,Sehwag got a wicket and Arafat was unable to do that due to which India was leading by 1-0.In the second round,Harbhajan was successful in taking a wicket while Umar Gul also missed the stumps due to which India was leading by 2-0.In third round,Robin Uthappa took a wicket while Afridi was unable to do so.Thus,in the end,the final score was 3-0 and India won this thriller against Pakistan. 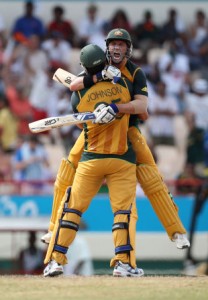 It was the second semi-final of the 2010 t20 world cup.The match was between Australia and Pakistan.Australia won the toss and elected to field first.Due to the fifties od Kamran and Umar Akmal and the 32  runs by Slaman Butt,Pakistan was able to score 191 runs.The pressure on Australia was intense due to which the Australian batting order collapsed.Cameron White scored a brilliant 43 off 31 balls.Mohommad Aamer took 3 wickets that day.Victory was in sight for Pakistan,but Michael Hussey started playing in an aggressive manner.In the last over,Ajmal was bowling .Hussey hit 22 runs off 4 balls in that over due to which Australia won the match.This match was remembered for Hussey’s brilliant 22 runs off 4 balls of Ajmal.