Pinterest was started by Ben Silbermann  , Paul Sciarra and Evan Sharp in March 2010. Ben Silberman was CEO and how he started Pinterest was an inspiring story. He describes the company as a “catalog of ideas,” rather than as a social network. We know well that it allows users to save images and categorize them on different boards. Basic ideas behind starting it was to share ones interest. Pinterest which means pin interest. 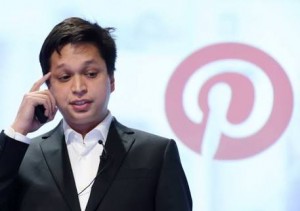 #1. Struggle in the starting :

In August 2008, Paul Sciarra quit his job at New York venture capital . His college friend Ben Silbermann quit his job at Google. They started a company called Cold Brew Labs. There was a third cofounder  but he was a student still, and he quit the company after a couple weeks to go back to school. if there is a “Mark Zuckerberg” or “Steve Jobs” of Pinterest it’s Ben Silbermann.

Ben always had the habit of collecting stuff like stamps and so he thought about creating a website that allows people to do the same thing. He started Pinterest after quitting his job at Google but after few month of trying Ben only got around 200-300 users.

Yes, at the time of starting the company, no one believed in Ben’s idea. Intact only a few understood what he was actually trying to convey.

In one interview Ben said that many people didn’t get the site when they first saw it and it didn’t have many fans back then. Ben said that he sent messages to all of his friends (around 300) but only a few of them seemed to have grasped the idea of Pinterest (less than 10 people i think)

Ben wasn’t just struggling with a site that is hard to understand but he also had serious problems attracting new users. For the first year Pinterest only got 9000 users.

Ben met too many investors and all of them rejected his idea. Personally if Ben came to me during the early days of Pinterest i think i wouldn’t have found the idea appealing.

In other words Ben was trying to market an idea that wasn’t receiving a warm welcome from anyone.

He hired a designer named Evan  away from Facebook. To convince Sharp away from a secure job at one of the industry’s most valuable companies, Silbermann, Sciarra, and Pinterest’s board agreed to give him the title “cofounder” – even though he joined three years after the company was founded.

One day when a blogger started recommending Pinterest the site took off very fast. obviously it was a famous blogger. The rest of the story is well known. Pinterest became a giant social network worth billions.

When i watched Ben in an interview i automatically recalled what Steve jobs said about success. Both said the same exact thing which is that in order to succeed your persistence must take over your rationality.

Jobs said that sometimes it becomes insane to keep going that any sane person would quit but here is a golden tip: In order to succeed in life you must be persistent in an insane way.

Conclusion: This inspiring story delivers a beautiful message that even hobbies can turn out to a great business.