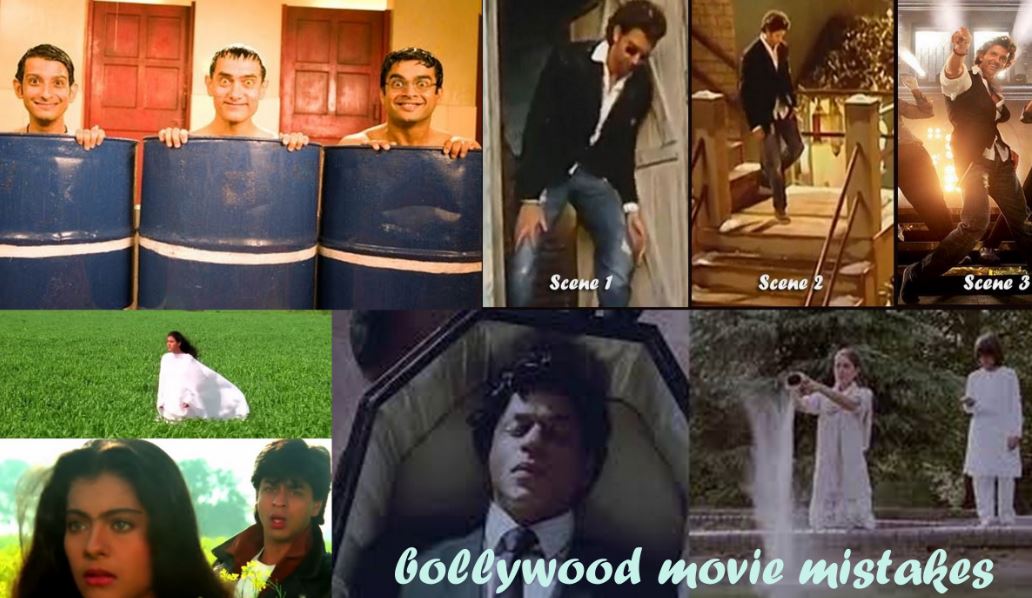 WE read some movie reviews and critics who ask us to leave our brain at home.
There are times when even movie makers forget their brains at home! The amount of senseless logics and mistakes in most Bollywood Movies just can’t be expressed in words.
Here are a few I noticed when I watched these movies again, you can also refer to these pictures to watch the mistakes and baseless logics used in bollywood movies,

Now just after a second, when the car is about to blow up, the car magicallychanges!

But when he starts dancing the shirt becomes half sleeve.

But wait he is a superhero right!So he can even do anything.

The movie which ran for 25 years but this  goes unnoticed.
In the begining of the song Tujhe Dekha To Ye Jaana Sanam,Kajol a.k.a.Simran is seen standing amidst mustard plants.

But when SRK plays that famous tune and does this.

Out of nowhere,mustard plants have flowered.

WOW!Still wondering whether it was the music or SRK which bloomed the flowers.

In this scene in Krish, Priyanka Chopra is shown wearing a Saree. Scene ends with her saree flapping away in wind –

while in next scene, Hrithik Roshan is shown chasing a dupatta !

It still is a goof if Hrithik roshan is chasing a saree after PC took it off or cut a piece off it. 😀 :D.

When Virus is explaining Farhan and Raju about their parents’ income the handwriting keeps changing.

Shahrukh’s character is shown to be travelling in a sleeper class throughout. But when he eventually gets down from the train, he de-boards from a general coach.

Also, in the beginning of the movie when he’s leaving for Goa, he keeps his grandfather’s ashes in his bag. But at the railway station, his grandmother hands it to him again!

The scene right before where Hrithik’s character first meets Katrina’s on a blind date, he’s hurt in a fight scene, and can barely move his leg. But the moment he meets Katrina’s character, boom! There’s magic and he starts dancing. Superb skills, BTW!

This time Katrina does it! in another scene  Hrithik and Katrina  got tangled after their bike crashes to the ground.

Then next second we see Katrina on the opposite side of Hrithik, tangle free, how?! Even Hrithik looks confused!

In Ra.One, when SRK dies, he has a Christian burial while he was South Indian Hindu in the film,

in the next scene, his wife does this!
That’s right. She immerses his ashes into the river

Siddharth Malhotra, Shraddha Kapoor and Riteish Deshmukh starrer film Ek Villain also had some mirror errors. There was this one scene where Riteish Deshmukh is being beaten up and in the middle of the fight his costume just changes

We saw costume change thing happen in songs but fight scenes too? Bollywood sure is progressing.

Katrina Kaif’s “Kamli” song from Dhoom 3 is a veritable gold mine of bloopers.

Thakur’s hands were actually visible in one of the shots in the epic final fight in Sholay.