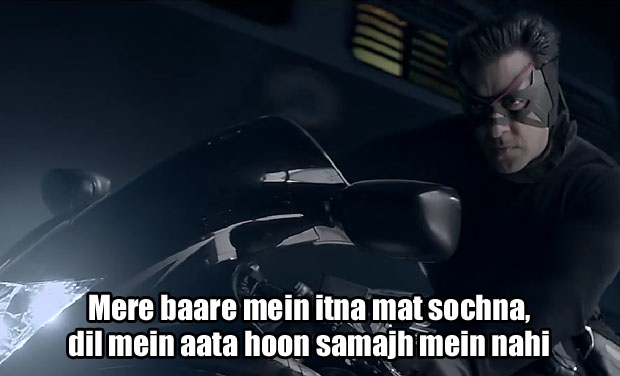 Shahrukh Khan may be the Baadshah of Bollywood, Aamir Khan the Mr. Perfectionist and Saif Ali Khan might be the chotte Nawab but Salman Khan is, all in all, Mr. Bollywood. Everyone’s favourite and the most popular Salman, has literally given and dedicated his whole life to the industry. Popularly known amongst his fans as “bhai”, Salman started his career nearly 3 decades ago. Bhai, from his early days, had acted in several top quality family entertaining movies.

I mean who could forget his marvellous acting in Andaz Aapna Aapna or his smashing portrayal as Radhe in Tere Naam. Salman has dedicated his life to making top quality films for his audience and fans.  So let us pay a small homage to this wonderful actor and check out some of the most fascinating Salman Khan Movie Dialogues from his all time hits. Here we go;

In Kick, alongside Nawazuddin Siddiqui, Salman showed his unique style. I mean who can forget the cycle and the local train scene. This dialogue absolutely portrays Bhai’s genuineness in reel and also real life.

In this movie he played the ultimate role of a common man. This common man was, though, extra ordinary in nature. Secretly Salman, with this dialogue, had actually paid homage to the billions of common people in India. Seriously, awesome!

Wanted was another movie where he played the role of a common Indian man—who could fight for all the right things for the people. The dialogue was also given in the movie at a time when the script itself demanded an intense throw.

“Zindagi mein teen cheez kabhi underestimate nahi karna. I, Me and Myself.”

Both of these dialogues were super hits as soon as they were spoken by Bhai. Rowdy Salman showed his calibre of doing ‘good’ for everyone in this movie; whilst being in love too!

Salman, the musician and singer, was simply best in this movie. His performance as Mannu was outstanding, and not only this but every single dialogue from this movie was awesome.

Bodyguard Lovely Singh, all throughout the movie, was always reporting for duty to all his fans. His avatar of being a no non-sense bodyguard was loved by all. The dialogue itself matched well with his character, which Salman of course played with superb dedication.

These two dialogues must be Bhai’s 2 of the most prolific and famous lines ever. Both were given in one single movie called Dabanng. Salam, the fit wale policeman, did an outstanding job as Chulbul Pandey.

Periodic films? Yes Bhai can pull those off too. Bhai easily defeated the British in this movie and the line was very well depicted too.

Bhai in this movie worked as a strict, for the people, policeman; this time in a very serious manner fighting off crime and syndicates associated with it. In this movie Salman had a very serious role which demanded action with stern acting and this dialogue attested that fury.

Radhe the ultimate lover, portrayed of course by Salman, won the hearts of many people. In fact the audience, which had gone to the see the movie, came out with numb eyes after watching Bhai’s performance in the film.

Who can forget Samlan’s portrayal of Suraj in this family entertainer? He played the ultimate ‘rich kid turned into daily labour’ in most of the most iconic way ever. Also, apart from this line, do you also remember how Salman use to call his to-be brother in law Arbaaz Khan (his brother in real life) in the movie? “Baade Bhaiyaaaaa” in a very kiddish and childish manner!

One of the most iconic dialogues from bollywood movies and these days used as the ultimate ice breaker!

People love this line and use it quite often, and why not. Salman had charmed us all up when he delivered this classic dialogue to the audience.

The audience were left trembling when this dialogue was delivered by bhai. Didi’s dewana dewaar did an excellent job in the movie and his role of Prem was regarded as Salman’s most iconic roles ever.

So, there you go! Controversies or not, Salman is the heart throb of bollywood and that’s why we can never underestimate him ever. In fact we should always be indebted to Bhai for the prolific dialogues he has given to us till date. So, love him or hate, but you can never ignore him!