Industry’s most reclusive star as well as “Mr. Perfectionist “of Bollywood, Aamir Khan  rules the heart of millions of his fans with his “one movie a year.”Lets see what are some of the lesser known facts about this Bollywood star and his upcoming movie:

1) Emma Watson, the London based actress would be soon making her Bollywood debut. Yes this is true, J Dey. Nandita Singgha, the director-producer, has apparently approached Emma for the role of a British journalist in  her biopic on Mid-day. While Aamir would be seen playing the lead role of the murdered crime reporter. Emma as journalist breaks the news of the murder to the world. But the twist in the news is that both of them won’t have any scenes together.

2) Aamir Khan’s alien, PK, has brought down the Great Wall of China. PK has broken all records and has crossed the 100 crore mark in China alone. Aamir was gifted a silver Hakama by none other than Jackie Chan. He turned up at the film’s success party held on Wednesday (June 11, 2015) wearing the same silver Hakama and was spotted attending the success bash along with wife Kiran Rao. 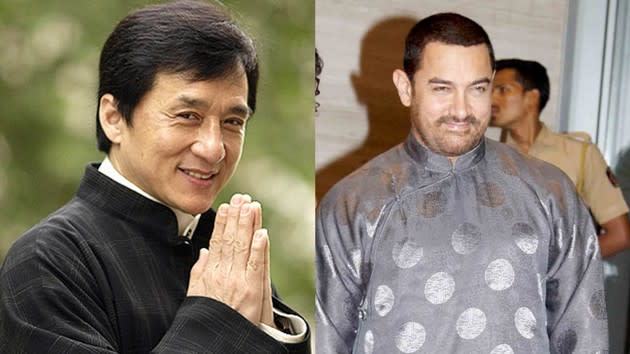 3) Anushka Sharma along with other celebrities were also present at the PK bash.  However, Aamir, who is one of the fittest actors in the industry, seemed to have bulked up too much for his next film Dangal. The actor now weighs 95 kilos and has put on the excess weight since he plays a wrestler in the film. According to a report, Aamir was quoted saying that his wife and mom were worried about his weight gain.

4)Aamir Khan is on the go for his role of a wrestler in the upcoming movie Dangal.  he is planning to wrap up the film Mid-day, the biopic of crime journalist, J Dey before he channels his energies to  Dangal. The biopic, that has been titled, Mid Dey, is expected to take only 20-25 days of Aamir’s time, which is why the actor has agreed to do it before Dangal. Apparently, the look that Aamir is going to sport for Dangal is somewhat similar to what is required for Mid Dey.

5)Aamir is going the extra mile to fit into the character of wrestler Mahavir Singh of Dangal.  He stumbled upon a channel, while surfing TV late at night, where a desi-style wrestling match was going on. He sat watching the match at 4 am, a report stated that Mr Perfectionist has been spending sleepless nights these days only to watch wrestling matches in order to prepare for his role. Aamir is such actor gets completely involved in whatever he does and for him time does not matter that’s why  he got the title-Mr Perfectionist.

6)There has been plenty of speculation around who will play Aamir Khan’s daughters in his upcoming sports biopic Dangal. After months of auditions, Fatima Shaikh,mumbai girl and Sanya Malhotra,a trained ballet dancer from Delhi, have been roped in for the coveted rolesof Amir’s wrestler daughters. Fatima has acted in a few films and a TV serial and dabbled in photography. Dangal, directed by Nitesh Tiwari, is inspired by the story of former wrestler Mahavir Singh, from Haryana’s Balali village, who built an ‘akhara‘ in his own house and coached his daughters to historic wins in what was primarily a man’s sport then. Aamir quoted for his movie that “Dangal is not just a film about wrestling but an emotional journey of a father and his two daughters, which teaches us to empower our girls.” 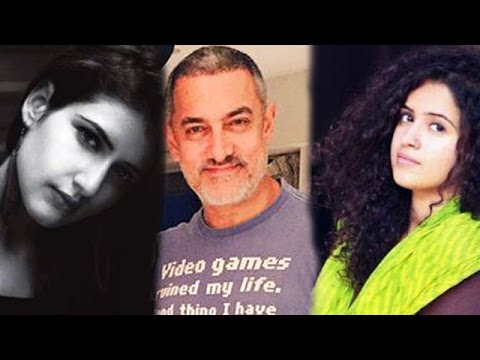 7) Two little girls, Zaira Wasim from Kashmir and Suhani Bhatnagar from Delhi have been shortlisted to play the younger Fatima and Sanya in the sports biopic directed by Nitesh Tiwari and inspired by the story of former wrestler Mahavir Singh. Geeta Phogat was India’s first female wrestler to win gold at the 2010 Commonwealth Games in the 55-kg freestyle category. Her sister, Babita Kumari, bagged the silver. All the four girls have been housed in Aamir’s former apartment in Bandra where they are living together and religiously following a strict daily regime.

8) Aamir Khan has always  been standing up for social causes and also raised concern over several social issues through his TV show Satyamev Jayate  and this time we hear that he had a meeting with the State Rural Development Minister, Pankaja Munde. Munde met Aamir Khan on June 9, 2015, at the latter’s residence. The meeting lasted a good 45 minutes. But both of them are tight-lipped on the matters discussed, even the media and photographers were not allowed inside. 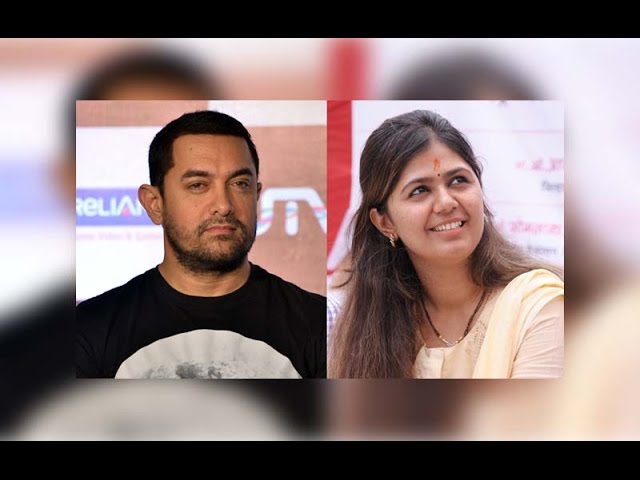 9)Actor Aamir Khan, who keeps losing and gaining weight for his films according to the demand of the scripts, says it worries his mother and wife. He has gained weight for his upcoming movie Dangal, and weighs 95 kg at present. Aamir was quoted in the report as saying, “I am 95 kg right now and that’s enough for the character. My breathing has changed… when I tie my laces, my stomach comes in between. After 20 seconds, I have to take a long breath. My mom and my wife are very worried about my health as they feel I am playing with my health. Even I feel the same,” he added. 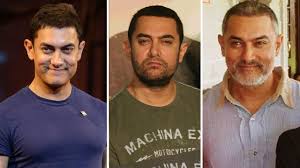 10)Aamir Khan, who learnt playing chess from his grandmother at the age of 6, has played the game with many Bollywood celebs at times. At the inauguration of the 3rd edition of the Maharashtra Chess League, when Aamir was asked if he has played chess with any actor on the sets of films, he said that he plays chess with whoever he finds on the sets. Naming some actors, Aamir said that he has played with Shammi Kapoor and Paresh Rawal, while among the actresses, Katrina Kaif is a good player. 11)The Gujarat High Court nullified a case against Aamir Khan and four others of illegal commercial shooting of protected animal, Chinkara, during the filming of Lagaan in Kutch. Chief Justice VM Sahai discovered that no live Chinkara was used or was in possession of the petitioner and the footage seen in the film was actually computer-generated.

12)We get to know about  Aamir Khan’s emotional side when he couldn’t control his tears after he watched Kalki Koechlin starrer Margarita, With a Straw at a private screening.About Aamir being so moved by the film, Kalki said, “Aamir loved the film. He was weeping while watching it. It’s surreal to have him sit next to me and say ‘Kalki, what can I do to get people watch this movie?’ It’s excellent. Kiran watched it first and told him, ‘You must see this movie’ and he said, ‘What can be great about this film?’ And now he watched and ended up crying.” 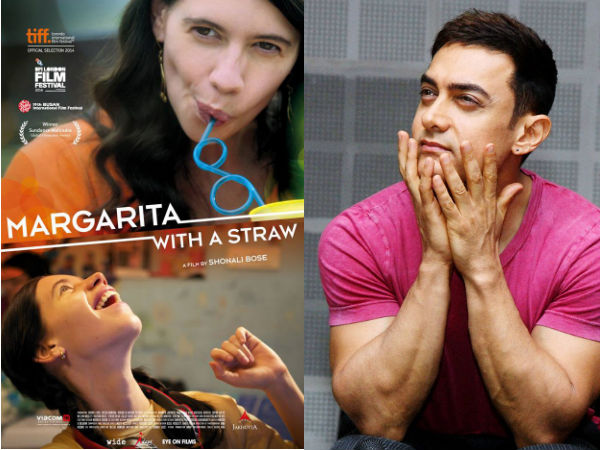 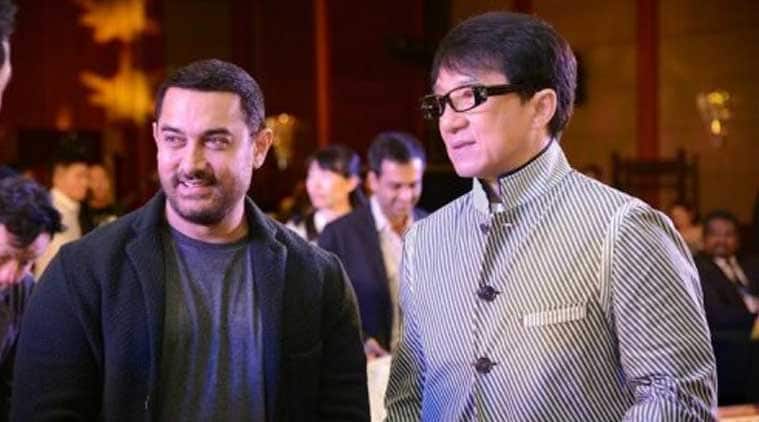