Your childhood would seem worthless now if you are someone who hasn’t read Harry Potter books or haven’t yet seen any of the movies in the Blockbuster series. Well! You do not agree with me I guess and would feel that it is a series only for kids and not up to the mark of being called ‘literature’. And that the movie was just only about VFX but did not had heart in it. And that it does not have any of the lessons that might help you later in life- The so called ‘Great Life Lessons’. Guess what? You are absolutely wrong in your thinking. And if you want proof then Abra-cadabra, I have it for you!!!

Here is the list of reasons or in your language ‘lessons’ that we learn from various Harry Potter characters:- 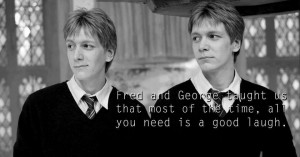 These are the Weasley twins whose pranks and strategies were the most fun-tastic ones in the series. You would just love them once you would see their guts and their quick-wittedness. Each and every prank of theirs never hurt anyone but yes, it made everyone laugh, even those felt like laughing upon whom the prank was done. Such was the cheeriness that both of them spread. Well the lesson that you learn from them is-

‘Most of the time, all that you need is a good laugh.’ 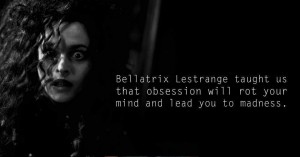 She is the one who is the villainous vamp in the series. She might be the sister of warm-hearted Sirius Black (Godfather of Harry Potter and friend of Harry’s parents) but is the right-hand of the dangerous Voldemort. She characterizes the evil that is absolutely cruel and unstoppable. Her portrayal showcases the times when everything that you try your best in is done wrong by few people who accuse you and lead you to your demise. The lesson that her character teaches us-

‘Obsession will rot your mind and lead you to madness’ 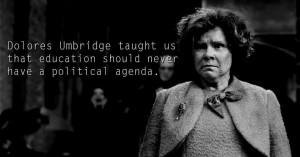 She is the one who acted as the cruel Headmistress while Dumbledore was absent and at times during her term played politics in every aspect of her life. In real life, she resembles the kind that you hate the most but do not speak about, the reason being- You don’t want to be in trouble! But she learnt a lesson in the series and taught us one too-

‘Education should never have a political agenda behind it. Let the system stay clean of any dirty politics’ 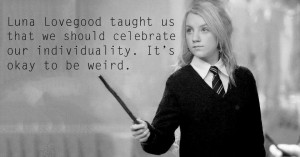 She is one of the most lovable characters in the Harry Potter world. But what if you meet someone like her in real life? Well, you won’t like her or at the most even demean her. After all, she would seem queer and strange to you. And the world nowadays does not appreciate being strange, it actually despises it. Moreover, you can even be bullied for it. But Luna provides a lesson that is worth understanding to lead a happy and contentious life-

‘We should celebrate our and other’s individuality. Never criticize anyone. It is okay to be weird’ 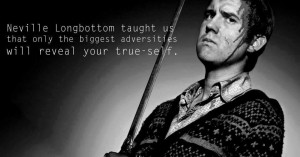 He is the guy who always muddles up stuff. Is the one who always is nervous and at times does things that are absolutely unworthy of him and is afraid of untoward happenings. Shy at times and stammers a lot, the kind that you won’t make friends because he seems worthless. But does he showcase strength of character and courage at times? Yes, he does. And what he provides as a lesson is worth knowing-

‘The biggest adversities and situations will reveal what your true-self is. So be strong during those times to know the strength of your character’ 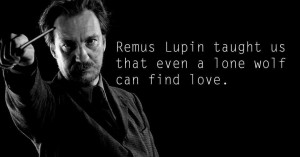 Someone who turns into a werewolf during the full moon and cannot live a normal happy life even if he wants to. What do you expect his life to be? That’s Remus Lupin for you. And yes! He was the ‘Defense against the Dark arts’ teacher at Hogwarts and the one who taught Harry to use ‘Patronus charm’ against the soul sucking Dementors. But not indulging much into the magical world, let me tell you the main lesson that he taught and something that every loner should learn and understand which is-

‘Even a lone wolf, how much lonely he might be, can find love. Just wait for the right time and the right moment’ 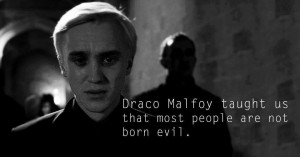 Draco Malfoy is the kind of character that you usually hate because he portrays the haughty, rich and moreover, someone who always criticizes others. Draco Malfoy hated Harry Potter and most of all the ones who supported him but he never intended to kill anyone. What he taught to the world is something that needs to be understood so that the family of a wrong-doer need not be punished for the crimes committed by the actual person.

‘Most people are not born evil. There is still humanity and love residing in them. Punish the criminal for the crime and not his family who didn’t have anything to do with it.’ 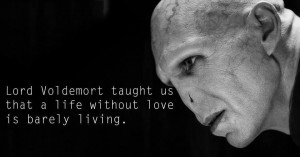 He is the man who was called by the residents of the Magical world as ‘You-know-who’, but who was called as Lord Voldemort by others, and only Voldemort by the ones who were against him. The character is totally evil with no tinge of mercy, feelings or love incorporated in any genetic part of him. Imagine someone who actually embossed his soul into eight different articles so that he could never die. What more do you expect from him? And in the end, what happened to him showcased that- 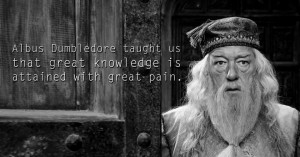 The Headmaster of Hogwarts and the one who is called as the ‘Greatest wizard of all times’, the one who  was the master of the Elder wand and mentor of Harry- Albus Dumbledore was a man of immense quality. He is the reason why the entire series seems so magical and interesting with twists and plots. It’s like he is the one who is writing the story and moreover, he always provides the solution for the most troublesome situations. But what his character teaches is something more than you can imagine-

READ MORE  10 Pakistanis who made an impact in Bollywood

‘Behind attaining Great knowledge is the reason of enduring great pains’ 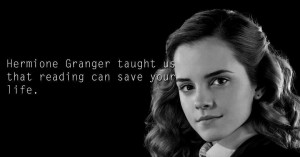 She is the epitome of the most intelligent student ever born. Someone who can learn anything and even applies it to the best manner possible in the most critical situations. After all, it is important that you learn and apply well, and this is what matters in life too. Even being someone who was born in a human family, she tried hard and learnt all the magical charms by heart. Her sheer perseverance is the reason behind keeping the friendship between her, Ron and Harry strong. But more than the value of friendship what she taught us otherwise is really interesting-

‘That reading can actually save your life’ 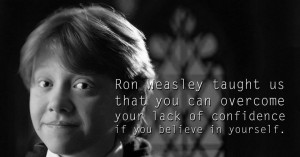 He is Harry’s best friend and love of Hermione. The freckle-faced redhead is one of the characters that you might have in your life too- the best friend that stays with you in times of joy and also distress. And yes, if Hermione taught us a lesson, then he does too- 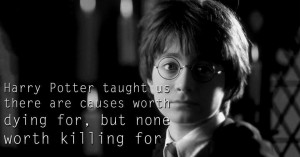 The lovable character, our very own hero, the savior of Hogwarts and the magical world is one of a kind. Well, in terms of strength and heart he is. By looks, well he is the simple-minded boy-next-door. But yes, he has truly been the pioneer who has won the hearts and minds of billions of teens and children worldwide. And most importantly, the lesson we learnt from him is-

‘There are causes worth dying for, but none worth killing for’