India is a land of religion. It is also the birthplace of some of the world’s major religions like Buddhism, Hinduism, Jainism, etc. Religious diversity is an important part of Indian customs. People follow various kinds of beliefs and practices according to their religions which changes after a few kilometers just like Indian languages. They believe in various superstitions that may not directly be linked to their religions but are influenced by all these factors.

Being an Indian, we are grown up with all these things which have overpowered our mind and every time something good or bad happens, this is the reason behind it. Believe it or not, Superstitions keeps hitting our mind all the time. See some of the top superstitions which are very famous in our Indian culture across the country and the possible logic behind them.

It is often said that those who have an itchy foot are unable to stay at a place for a long time. Others say it denotes that you might enjoy a tour very soon. But it is also said that if your left foot itches then your upcoming trip might get canceled as well.

Another superstition that is very common among the Indians is a spasm. It is believed that if your right eye twitches then you will come across positive things, guests might visit you or perhaps you might meet someone whom you haven’t seen in a long time. But if your left eye jumps, then beware some bad is waiting for you.

4. Moles on the nose

According to many superstitious people if you have a mole on your nose this implies that you are good in money management and financially sorted.

Another scary yet interesting superstition people believe in is keeping a knife under your pillow to avoid bad dreams. This is so spread everywhere and you will find many people doing this activity. If it works, their belief doubles and if it doesn’t work, then they take it for some other reason but their superstition remains alive.

6. Do not eat sweets and go out

This is so prominent in the Indian culture where they believe that you should never leave outside your home after eating sweets. At least before leaving, take some salt or ‘namkeen’ in your mouth and wait for some 10 minutes. I don’t know the reason, WHY? The consequence is that some bad souls will get inside your body or you will get sick.

7. Trying a lemon and some chilies

It is seen that people are jealous of each other’s wealth and happiness. Thus when they see losing their money from their business, they tie this lemon with some chilies in front of their door to avoid the evil eyes of the people. This is practiced by almost everybody in our country unless they don’t see their business sinking. It saves you from ‘BURA NAZAR’ according to them.

8. Broken glass in the house is not good

When glass breaks in the house, it is considered bad for the people living in the house. According to the people, it brings troubles and bad lucks to the house. It should be immediately removed from the house to reduce its effects on them.

9. If a crow calls on your house, it is a sign of guests coming

It is assumed that when a crow calls on your house, it gives us a sign of guests or relatives coming to your house. Well, this is believed strongly all over the country but in my personal view, it hardly matters because we have a lot of numbers of crows spread all over the country and in a country like India, every few hours you will find some other persons visiting your house.

This superstition lies in every 1 out of 3 houses in India. It says that when someone is going out of their home, never ask them, “Where are you going?” otherwise their purpose of going out will not be fulfilled. Well, it is tried by many people but it hardly matters to their purposes.

11. If you are about to travel and someone sneezes, is a Bad Omen

If you are just ready to go somewhere and from nowhere someone sneezes, then you have to wait for some time inside and then go out otherwise it is considered as a bad omen. You may have often seen these incidents in your house, locality, etc.

When you go to sleep at night, it is said by people that you should not put your head in the south direction while sleeping because they believe that a dead person is kept in such a position. But yes, this is very true if you have noticed sometimes.

READ MORE  10 Bollywood Celebrities Who Got Pregnant Before Marriage

13. Number 13 is considered to be an evil number

This is almost practiced all over the world where people say number 13 is unlucky and evil. You will not find any room for this number in hotels, apartments, etc. Even in India, Many high tall buildings don’t have this 13th floor. Also, Friday with the same date is considered an evil day where ghosts come out of their tombs according to the people. 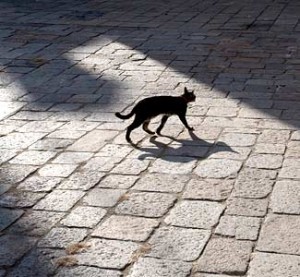 14. A black cat crossing the road

It is said that when a black cat crosses your path, then you should not go forward. You will see people doing different funny activities like waiting for another person to cross first, changing the route, throwing a chappal and then go, etc. They believe that something bad will happen to them for sure if they cross the road although the cat is no reason for it.

Many times people taunt you saying, “Please don’t shake your legs”.The reason behind this is it brings bad luck to the family or in the person’s life itself. So if you ever find someone doing the same thing, you should stop him saying the same thing. This may help them from bad lucks in their life.

So just look around yourselves and you will find more superstitions that still people believe very strongly and yes it may help you to save from many uncertain events coming in your life.