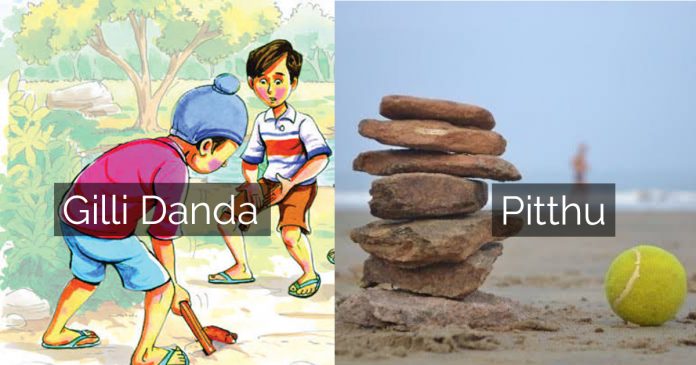 It is said that childhood is the most beautiful part of one’s memories and out of those memories some types of memories play a very significant role. Remembering those memories brings a never-ending smile on our faces. Childhood games are the most cherished part of one’s life. But as we grew older some of these memories are faded away and games we play as a child are forgotten.

So here is the article that will remind you of the games played when you were a child and I bet, it will bring a priceless smile on your faces. Raja Mantri Chor Sipahi was my all-time favorite childhood indoor games.

#1. Raja Mantri Chor Sipahi – a game we used to played in the childhood days

Raja, Mantri, Chor, Sipahi was the most played indoor game in classroom lectures during schooldays. It is a wonderful four people game where the ‘Mantri’ has to identify the ‘Chor.’

The game begins with making 4 chits namely Raja (1000 points), Mantri (500 points), Chor( 0 points), and Sipahi (300 points). Each chit is folded and the 4 players are asked to pick one chit. Players open their chit to find out their character.  The Raja exclaims “Mera Mantri Kaun ?” The Mantri says “Main”! and then has to identify the ‘Chor’ from the other 2 remaining players. If the Mantri, guesses correctly then the points are retained, or else he/she surrenders them to the Chor. The player with the highest score wins the game.

“Tippy Tippy Tap, what color you want?” these were the words we use to speak as a child. This game was all about a paper folded in the way as given above with colors and numbers written on it.

This game was mostly played when you were in the 1-3rd class.

Pittu garam( or seven stones), a very popular traditional game, not very common these days in urban areas., was once the most played game by the youngster in every street. A predefined area is occupied by two opposing teams of equal numbers. A circle is drawn in between in which 7 flat stones were kept one over the other forming a tower-like structure.

The teams were divided as throwing and catching. The throwing team is given 3 attempts to throw a ball at the stone tower to dislodge it. Once dislodged, the catching team has to stop the opposing team from rebuilding the tower by hitting each member with the same ball. But the condition is that a player from catching a team cannot move while the ball is in his hand.

Hide and seek(well known as chhupan chhupai in India) is the oldest and popular children game played all over the world, in which one player counts from 1-100, and the rest of the players hide in some places during the count. Then denner opens his eyes and tries to find the hiders. When he finds one of them he has to speak his ‘name’ and then ’aispice’. A hider has to somehow reach near the dinner(without letting him know) and touch him and say ‘dhappa’. One last hider who remains unfound wins the game.

Glass marbles (known as kanchay in India) is said to be the most popular and oldest game played in rural areas. The marbles are fired into the playing area from the finger joints while standing behind a curtain line. Marbles are collected in nos. at the distance of a meter. The Player has to shot a marble using his finger joint into that circle area such that it touches another marble and remains in that circle. A player who is successful in collecting all marbles in that circle is said to be the winner. And as a winner, he wins all those marbles as a reward.

This game was one of the most interesting games played as a child and was so famous that this game was brought into Bollywood movies as an entertainer. There are two teams on the opposite sides of a field and a circle is drawn in between the field with a handkerchief or anything placed in between the circle. Now teams have to assign a number to their players. And as soon the referee announces the number, that player of the respective teams has to run and bring that handkerchief to his team. So the players are dog here and the thing kept in a circle , a bone.

This was one of the most popular games played when you had a big group to play. In this game, a person each person to be caught joins hands with then denner. Now the two runs with hand in hand and catch other players and increases the chain. But only the players at the ends of the chain can catch others. The player left at the end of the game wins the game.

This game was an age-old favorite game of many young girls and some boys. This game consisted of a series of rectangles drawn on the ground and a small pebble to be played. This game could be played both indoor and outdoor. This was the simplest game in which you have to throw a pebble in the rectangular box sequentially and hopp over them on a single leg.

Vish means poison. Amrit means nectar. Vish Amrit is thus a game of poison and nectar, of good and bad, and was the most played game in childhood especially in schools. One denner runs around catching people. Upon touching someone, the denner shouts “VISH!” which instantly freezes person, who has to stand still holding the pose. The rest of the players must liberate them by touching them and saying “AMRIT!” The game ends when the denner freezes all the players.

Remember the word ‘Kho’?? this was the word we used to say while playing this game in our childhood. Kho kho is known to be one of the most popular traditional sports in India. This game is played from the historic times and was played on ‘Raths’ and was known as Rathera.

It is simple fun, enjoying a game that involved chasing and touching a person by dodging, feinting and bursts of control speed. All you got to do is sit alternatively in the opposite direction in a line, and the denner will say ‘Kho’ by tapping your back, and then you will run to chase the person.

These were the lines spoken by two players forming a hut-like structure with hands. The rest of the players go from below the hut, and once the lines are spoken are finished, the player caught between the two is out of the game. The last man standing wins the game.