A journalist is a person who knows something about everything.They are well informed about events happening around the world and thus brings it in form of either newspapers,television and interact with people regarding various issues that need to be solved.

Yes,We are talking of one of those journalists,Mr. Arnab Goswami,who is a journalist but actually don’t sound like a journalist may be due to the following reasons : 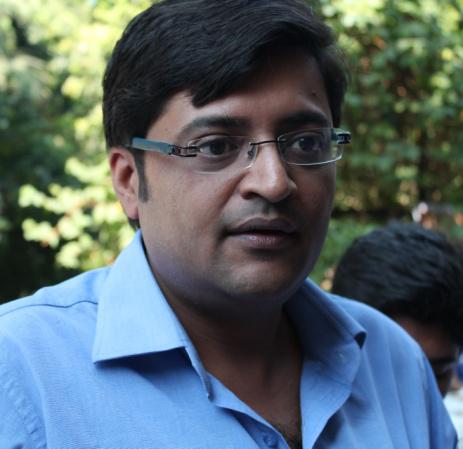 1) His behaviour: A Behaviour of a journalist is supposed to be a patient one and should listen what others say during an interaction and accordingly judge and ask questions but Mr. Arnab Goswami is always seen to be a straight forward person which people call ‘Angry young man’It has been noticed in the television on his show “The News Hour Debate” where he always keeps to put his points front in the panel and don’t let others to even complete their statement which is very sad when we see him doing his work as a journalist. It is very well understood that they are supposed to ask direct question to the panelist but the behavior which is shown of biasness doent suit him being called a journalist.

2) Lack Of Respect: Who Dont want respect in this world?? Every single person needs some respect everywhere especially when they are going to a media show to express their feelings for the discussions going on out there.We see that he dont give a bit respect to his guest in his show . There are many instances where we see the guest before starting a discussion asks him to be soft spoken and calm.How funny is that listening as being a journalist?

3) Doesn’t listen to others : The viewers of the television news like to see the points stated by both the parties and arguing them on a particular matter but this gentleman,if you notice everytime while going on a debate would always be keen to put his points on the ground and doesnt listen to what others say.He thinks that he knows everything and acts like others are foolish which is not a trait of a good journalist,I believe(personally).

4) He is biased: A Journalist in my personal view should be neutral to all the people and should ask question which is relevant to the facts.But Arnab is so biased towards some persons or political parties ,lets say AAP and BJP, he just does all this to increase its TRP and nothing more.The way he becomes so personal at times doesnt really suits a journalist i suppose.

5) Always Blames Others: It’s not wrong to blame anyone who has done something wrong until the fact it don’t exceeds their capacity of being a journalists.Yes,I am saying that Arnab always blames the person he talks to even if the person apologizes for what he has done. He has the habit of bombarding them with awful questions and always blames the political parties.He asks for the people but the way he choose is not right.

6) Doesnt create a balanced environment: When a discussion is going on, it is very well understood that both the agendas and their statement is considered before coming to a final resolution.Unfortunately,Arnab fails to maintain his part of creating a thoughtful environment for the panelists. He throws facts,asks questions and does not create an atmosphere where democratic sharing of thought is possible.

7) Short Tempered: A journalist is supposed to be patient ,determined and the most of all is to give a chance to the panelist to hear. The reason Arnab dont sound like a journalist because he fails to act as a intermediate between the people present in a discussion. He is so biased and always stop them in between before completing the statement and gives a evil laugh sometimes which is a bad signal .

8) Sticks to a question and becomes too personal : I dont Think that a journalist should become too personal to their guest as it is a public show wherin the people might feel offended being their privacy exposed in public.Arnab is a straightforward person who asks direct question to the panelist which is not wrong but then he becomes personal to them and wants answer of the question asked no matter what happens.

9) Acts oversmart : People dont like talking to people who acts Oversmart,isn’t it?True is that. Arnab always acts oversmart in his debate by blaming them and trapping them in his cirlcle ,full of questions and thinks that he knows everything and what others say is just blabbering around,is it? Does he sound Like a Journalist in this way?I dont think so.

10) Makes Fun of People: He has the tendency of making fun of people everytime he talkes to them about some serious issues.He just dont let them speak and express but just makes them sit at a place and listen to what he says.Is that a Good journalist? No, The shocking part of the debate is when he himself gets involved between the discussion and makes the environment unstable,thus creating a conflicting situation for them.

ACCORDING TO ME, “A Good Journalist Is one who Understand all the facts and shapes it to a well-defined set of questions and allows others to express their views regarding the same and interact smoothly.”