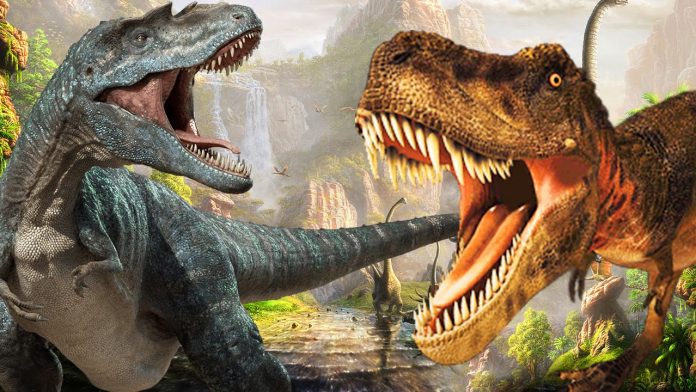 No! T-Rex is not on the list! Apparently, when people say dinosaur … T-rex is the first one that comes to mind!

However a lot of other huge, massive and marvellous creatures walked this earth before we did!
Dinosaurs can be boring. But it is a very fascinating subject to learn about these beast we know nothing about!

Even Ross Geller from F.R.I.E.N.D.S supports this…as he was a Palaeontologist!

Fun Fact: A number of dinosaurs had been named even before the word dinosaur was coined.

This word was proposed as a name for the entire species by Richard Owen in 1842.

But the first dinosaur was named—Megalosaurus meaning “A great lizard”– in the year 1824 by Reverend William Buckland. (Image below)

Here are 10 Heaviest Dinosaurs of all time you probably should know about!

Fossil Remains of this dinosaur were first found in southern India. Some authorities and Researchers have estimated it as having weighed as much as 122 tonnes! Which is by calculation more than a Blue whale!
However this wasn’t proved in reality and thus still under goes questioning.

Amphicoelias’s massive size with a length of some 25-60m (That is approx., 82 feet and more) has been extrapolated from vertebrae fragments discovered in Colorado in 1877. However it’s been lost since then.

Puertasaurus’s huge size has been estimated from partial remains found in Patagonia in 2001. Not much is found about this particular dinosaur.

However it is said that one hit from this one would wound and kill a T-rex on spot!

An Argentinean farmer discovered a 1.8m (Approx. 6 feet) bone in 1988.
It was found to be the shinbone… of a previously unknown dinosaur.
This was then researched and given the name– “Argentinosaurus”

Argyrosaurus is a dinosaur from South America. Argyrosaurus means—“Silver Lizard”
There’s no absolute reason why it has been named such.

Sauroposeidon— in the beginning, Known only from its vertebrae discovered in Oklahoma in 1994.

There was an age, where Sauropods were thought to be shrinking in size. The Sauroposeidon was a titan.
Based on the several incomplete fossils that have been discovered in the US, this gigantic monster is believed to have grown to about 100 feet in length and to have weighed 60-80 tonnes.

Paralititan’s remains were discovered in 2—1 in the Sahara desert in Egypt. Its remains suggest that is was a giant Vegetarian! It gobbled up a lot of plants…

Antarctosaurus is a creature whose thigh bone alone measures 2.3m (7.5 feet approx.) and a total length of 18m (that is 60 feet) has been estimated for this big guy.
Some authorities put its weight around 80 tonnes.

The largest dinosaur yet discovered in Europe is…wait for it—Turiasaurus!
Its remains were unearthed in Spain in the year 2003.

Fragments of Supersaurus were unearthed in Colorado in 1972. Another more complete specimen was discovered in Wyoming. It was called—“Jumbo”

It doesn’t matter if you like reading about them in a book, Flipping through pictures you wonder how could be even taken, watching a movie about them conquering an island, or going to see an impressive display of bones in Museums which bring these ancient giants back to life — everyone loves dinosaurs.
There are places people visit to see them.
Ohio’s Kings Island Theme Park apparently is one of the best of all places for its realistic approach.

So that was top 10 heaviest bad-assed Dinosaurs to walk this earth!
If you could resurrect one of them…(For fun purposes of course…pick a herbivore 😛 )…which one would that be?Leave us your answers and some love in the comments below!